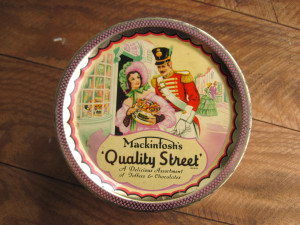 I find it strange how, so often, two seemingly unconnected incidents cause interest at the same time, only to find that in fact they have a connection. It’s happened to me again recently.

Quality Street, as a product name, has always intrigued me and I was doing a bit of research on the subject when the delightful Una Stubbs appeared on the BBC series Who Do You Think You Are? the other week, Now sadly, I do remember when Una Stubbs was the face of Rowntree, though I was clearly far too young to be influenced by the marketing message. She discovered that her grandfather used to work at Rowntrees in York, and the programme traced his journey from York to Welwyn Garden City. Quality Street was developed by Mackintosh (in Harrogate), which then became Rowntree Mackintosh, so there we have the link!

Quality Street was launched by Mackintosh in 1936. The name was inspired by a play by JM Barrie called Quality Street, although in fact it’s a play on the words Quality Sweet, and the figures in the design on the early tins are based on ‘The Major’ and ‘Miss’ who were the principle characters in the play. The figures on the tin were affectionately called Major Quality and Miss Sweetly. In the early 1930s only the wealthy could afford boxed chocolates; exotic flavours in expensive packaging. Harold Mackintosh wanted to produce chocolates that working class people could afford so he developed a process of covering different toffees in chocolate and then packaging them in attractive, low-cost tins. Rather than having each chocolate separated in costly trays, he decided to cover each piece, individually, in coloured paper. Through his ideas he introduced the world’s first twist-wrapping machine. The different wrappings of the sweets are all very distinctive, but so is their shape and size. It was an experience he wanted the whole family to enjoy.

It’s an interesting story. Not only was Harold Mackintosh a marketing genius to develop and successfully sell a product during a time when the world was still feeling the effects of the economic crash and about to go to war, his vision of quality is reflected through the product in its design, ingenuity, conformity and production development. He set high standards and that’s reflected in the product and it’s longevity, which we still enjoy today.

Stepping Stones for Business provides quality and safety consultancy. If you need advice on emergency and evacuation procedures then get in touch. Email  info@ssfb.co.uk or call 0333 321 0131.

Want to join the discussion?
Feel free to contribute!